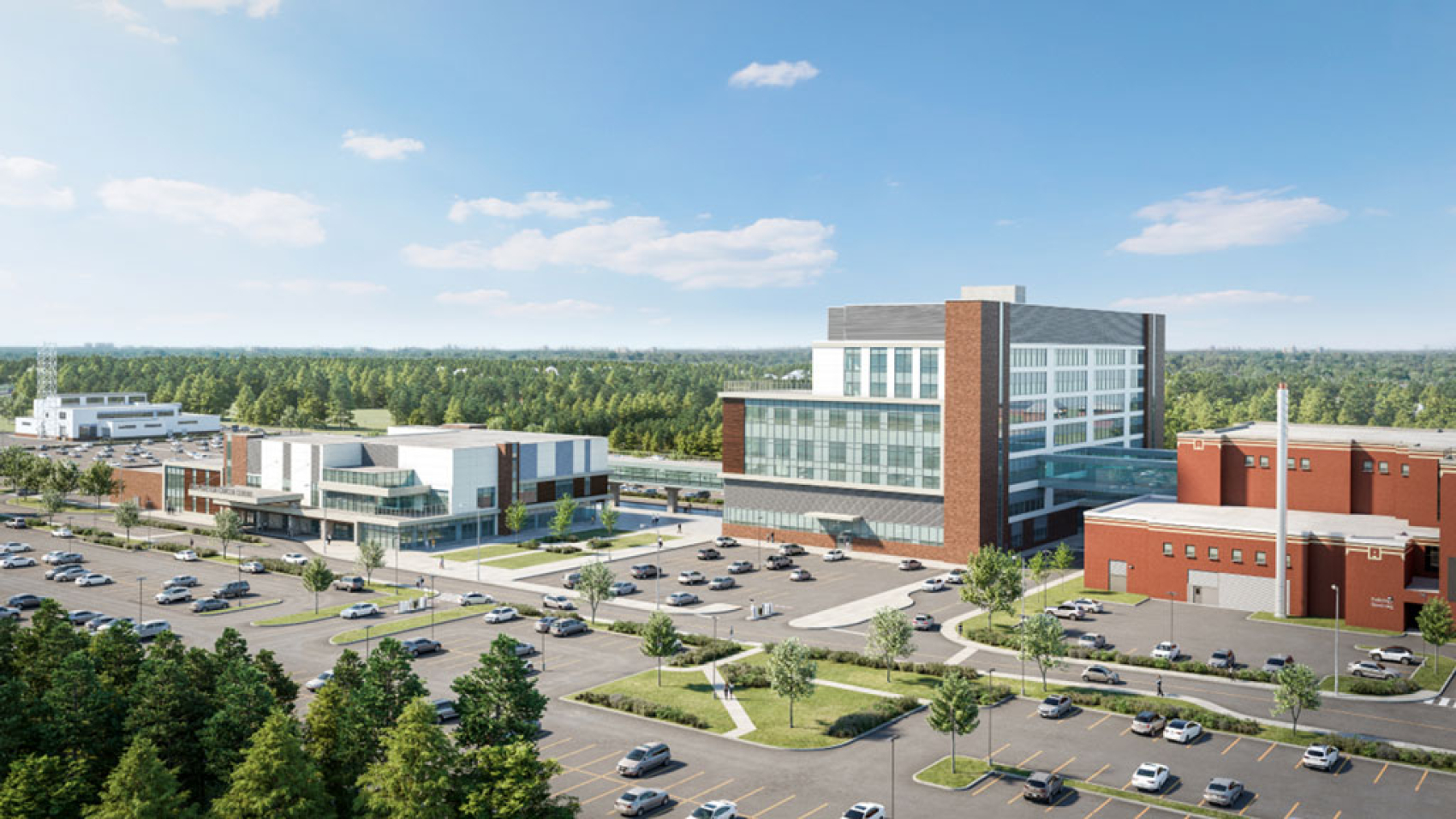 The Cape Breton Regional Hospital (CBRH), the island’s only major health care facility serving a population of just over 100,000, is undergoing its first major expansion since the hospital was built in Sydney in the early 1990s.

Set at $500 million, the three-building, 400,000-square-foot project is slated to be completed over the next six years with the first building, the energy centre, due to open next year.

The project is actually part of a comprehensive upgrade of health care facilities in the wider Sydney area, known as the Cape Breton Regional Municipality (CBRM), including new buildings in Glace Bay, New Waterford and North Sydney. All projects combined total about $1 billion. Meanwhile, once the main hospital expansion is completed, the existing hospital will undergo renovations.

The project will see constructed a 96,000, two-and-a-half-storey new cancer centre and a 320,000-square-foot eight-storey clinical services building that will include surgical suites, inpatient beds, emergency and critical care services.

The new buildings are being built immediately next to the current hospital on land mostly owned by the province and easily accessible by a city highway bypass. Once finished, the medical buildings will be connected to the existing hospital.

Site preparation began in 2020 with foundation work last year and the first structural steel going up in June.

While construction has proceeded with no specific challenges on the physical footprint there have been some external issues.

Chief among these is Cape Breton’s relatively small market. While the CBRH is starting to take shape, another massive construction project is well underway on the Sydney waterfront, Nova Scotia Community College’s $170 million Marconi campus.

“People are really really busy,” said Nicholas Goodine, director of CBRM Healthcare with the provincial department of public works. “We knew from the outset that we would have some labour challenges.”

Getting building supplies, a lingering effect of the pandemic, has also been a factor, which “is slowing us up a bit,” Paul Frank, the design team lead added.

As a result, Goodine said the two projects are working “closely” to time out tendering, not to saturate the market and “get good bidding.”

They’re also working with the local community college and with the stipulation that 25 per cent of jobs go to apprenticeship trades. As well, 10 per cent of the workforce has been set aside for “diverse workers” like women, First Nations and people with disabilities.

This is a traditional build not a P3. The province is essentially the general contractor, but Pomerleau Lindsay Health Care Partners has been hired as the construction manager.

In terms of sequencing work, the province has decided to go with a construction manager model. This allows tenders to go out in packages as the project moves along.

“You can get construction started earlier,” Frank said.

So once sections of the buildings are designed tenders can go out. A downside, however, is that sometimes stages have to be slightly “massaged” to make them fit, he said.

The government decided on this method to allow “some control” over the size of the trades’ packages.

“Whereas we are in a smaller market with a fairly large project we saw that as being advantageous to ensure that we could break things up in such a way to get local competition,” Goodine said.

And, of course, this method speeds up the construction cycle.

Currently, on the energy centre building, all of the packages have been tendered, and on the cancer centre footings, foundations, steel and exterior cladding have been tendered. The next package will be mechanical, electrical and plumbing and then interiors.

While foundations and services were largely completed last year, some footings are still going in.

The cancer centre, for example, will have two linear accelerators for cancer treatment. The bunkers for them have to be constructed with high stress concrete.

“It can’t have any cold joints,” Frank said. “When we start pouring, we’re going to be pouring for about 24 to 30 straight hours from two concrete plants.”

The hospital project was partly through the design process when COVID-19 hit in 2020. A decision was quickly made to upgrade the design for any future pandemics. For example, plexiglass screens will be built-in to become permanent and waiting rooms will be smaller and spread out.

“We’re taking all of the prevention and control measures, which is something that a lot of places aren’t doing but we decided on this one that we would do that,” Frank said.

Meanwhile, in terms of the hard build, energy will be saved by installing Solara panels in the penthouses to attract maximum light regardless of the time of year. All windows will be triple glazed.

Most of the heat will come from a biomass boiler, a large wood chip boiler with some oil backup.

Follow on Instagram
Join us TONIGHT for an open house style community information session where we will be sharing updates and details on the Cape Breton Regional Hospital project! This is your chance to ask questions and hear from the architects, designers, and community partners who are working directly on the project. 👷‍👉 Thursday, November 17, 2022👉 Drop in between 5:30 p.m. and 7:30 p.m.👉 Port of Sydney, 90 Esplanade, SydneyPre-register today by visiting ➡️ buff.ly/3DymVLs ... See MoreSee Less

Construction work is underway at the Cape Breton Regional Hospital and you’re invited to join the @cbpartnership for a community information session on Thursday, November 17, from 5:30 to 7:30 p.m. at the Port of Sydney! 🚧

To read more about this exciting announcement, visit the link below! ⬇️

Have you been intrigued seeing the progress of the work at the Cape Breton Regional Hospital while passing by on the highway? Take a look at this heavy column for the Cancer Centre from @RkoSteel