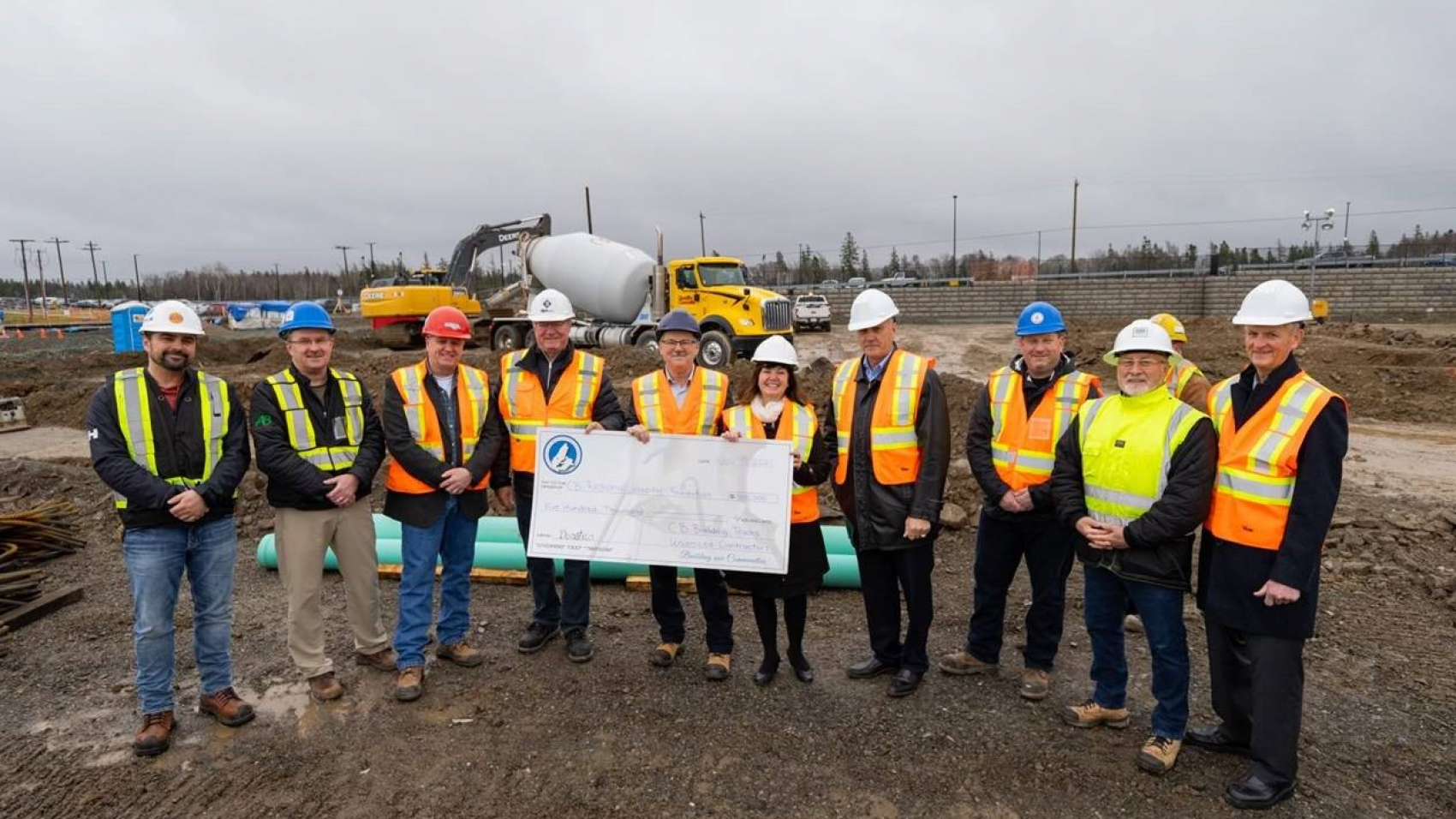 SYDNEY, N.S – The Cape Breton Building Trades and Unionized Contractors have pledged $500,000 to the Cape Breton Regional Hospital Foundation’s Cancer Care Here at Home Campaign, which will be paid in $100,000 installments over the next five years.

The gift announcement was made today during the official concrete pouring of the new Cape Breton Cancer Centre.

“We’re proud to say that this gift of $500,000 is the largest gift ever given from the Cape Breton Building Trades and Unionized Contractors,” says Jack Wall, President of the Cape Breton Island Building and Construction Trades Council. “Its significance matches our desire to build and have access to healthcare services, like the new Cancer Centre, here at home. We’re proud to be building this Cancer Centre, and we feel fortunate to also be able to give back by means of donation as well.”

Funds for the half-million-dollar donation are a result of payroll deductions received from unionized employees and matched by contractors.

“Every single unionized building trades member, and every unionized contractor working on the Island, have contributed to this donation,” says Daryl Baxendale, Mechanical Manager, Lynk Electric. “We are proud to say that the unionized construction industry on Cape Breton Island remains very strong, with labour and management working closely together to provide the skilled tradespersons, trades training, and safety programs necessary to have this Cancer Center – and numerous other significant infrastructure projects – built successfully and collaboratively in our community.”

Though this gift is the largest the Building Trades and Unionized Contractors have given, it’s not the first time they’ve supported the Cape Breton Cancer Centre.

“The Cape Breton Building Trades and Unionized Contractors made a significant gift when the current Cape Breton Cancer Centre was being built in 1998, as well as helping to build the physical Centre” says Paula MacNeil, CEO of the Cape Breton Regional Hospital Foundation. “To see their generosity and hard work go toward this significant cause, once again, is absolutely heartwarming. This group is working hard to build our Cape Breton community, and we at the Foundation thank them for their positive contributions.”

“This is a transformational gift for cancer care in Cape Breton, for which we are incredibly grateful,” says Mike McPhee, Chair, Cancer Care Here at Home Campaign. “What the building trades and the unionized contractors are doing truly showcases the spirit of Cape Breton – working together for the greater good of our community.”

To learn more about or support the Cancer Care Here at Home Campaign, visit www.cancercarehereathome.ca.

Representing thousands of trades professionals and hundreds of unionized contractors, with multiple management and support staff, the Cape Breton Building Trades and Unionized Contractors are involved in almost every major infrastructure project in Cape Breton.

In 2020, a historical 5-year agreement was signed by members of the Cape Breton Building Trades and Unionized Contractors to bring labour stability to the Industrial-Commercial-Institutional (ICI) construction sector in response to the major infrastructure projects now underway in Cape Breton. The industry has a focus on opening opportunities for underrepresented individuals and finding ways to ensure a more sustainable construction sector.

On Friday, June 17, we took a tour of the location

On May 31 we were proud to host a community engage

There are so many great projects on the way and underway across Cape Breton - Unama'ki that are transforming our built-environment and communities! Tomorrow is literally being built in front of our eyes, and we are so excited to watch it unfold.

Last Friday, we took a tour of the location for the future Cape Breton Cancer Centre. Thank you to the CBRM Health Care Redevelopment Team for the invitation to join Toonie Tours in Support of Move Because You Care and the Area of Greatest Need fund with the @CBRHFoundation! 🚧

This week's New Country 103.5 Construction Crew is Municipal Ready Mix! We were pumped to visit this crew working on Douglas Avenue in Glace Bay today! 🚧

On May 31 we were proud to host a community engagement session at @EmeraCentreNS for the Northside Health Complex Project, part of the local Healthcare Redevelopment Projects underway in Cape Breton - Unama'ki. Take a look at this highlight video from the session! 🏗🏨🎥